Kathleen Mare’e grew up in the south-western suburbs of Sydney, where family holidays by the beach and tormenting her two younger brothers, was how she spent her early years. But at the young age of 11, when she submitted a short story to a talented writing competition through the NSW schools program, not only did she win it, but she quickly found a love for it as well.

Throughout her schooling, writing was a hobby, along with sketching and various sports. But fast forward to her adult years when she moved to Europe to follow her husbands field hockey dream, and her love for writing surged to the surface.
Her debut story, Cut, was penned over two years where her hobby seemed to lead to the completion of Pennys’ world. The rest of the series came the following year.

It’s funny the things you notice as a child.
Like the way people uneasily glance away from me whenever I catch their eye. Or the way a stranger seems to smile happily at other children, but when I say hello, their smile looks more uneasy than warm…

But as I approach the steel gates to the elite Arthur Academy, I can’t help but take a long-awaited breath towards my freedom. Finally, I have the chance to build the life I want. A future. Something that gives me more to live for than the daily beatings my childhood only ever knew. The girl I used to be doesn’t exist here. But even as the confidence grows about a life I now have control over, I can’t help but feel there could be something else waiting for me here. Something I’ve never faced before.

And it isn’t something I could prepare for.
And preparation is what got me out. It got me here.

I can’t afford to lose this opportunity, because if I lose this hand, it’s more than just a loss. 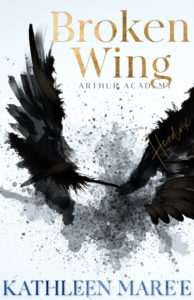 I grip the leather ball in my hand, feeling the weight of the year pressing down on me. If it was just football, I could deal, but with my last name – it’s everything else that suffocates me. The Arthur Elite is what they call us, and we each have our roles to play. But my fathers given me the next two years to do what the hell I want without his interference, before he’ll own me and I’ll become nothing but his pawn.

After that, when college is done, I dread the life I’ll have to lead. The role I’ll be forced to play.
It should be simple. Just stroll through the steel gates and be the crown they all see; but I can’t help but feel there is something lurking beneath the surface. There is something different about this year that I sense inside my dark soul.

And it isn’t something I am prepared for; even when staying ahead is the one thing that ensures my next breath.

Because when I lose a hand, it’s more than just a loss.
It’s like losing a limb. A bird breaking its wing.

And without that – I can’t fly toward freedom.
And my freedom right now, is all I have to hold onto.

Urban Fantasy Magazine: Welcome! To start things off, where did the main characters’ names, Paxton and Hendrix, come from?

KATHLEEN MARE’E: Well, during ‘covid’ I was spending far too much time binge-watching Netflix than I should have (especially when I had novels to write) and the name Paxton actually came from a show called Never Have I Ever! Two things about his character really stuck with me… One, was that I hadn’t really heard that name before and two, was that his character was quite complex in the way that his personal life didn’t really match his supposed exterior. When I started Broken Wing, the hero in my head was always a ‘Pax’.

And for my heroine, I really wanted a strong name that didn’t quite match her exterior. She is a rather studious looking girl, with her long dark side-braid and glasses, but she’s no wallflower either. I wanted a gender-neutral, tough-rocker name that would fit her strength and Hendrix just seemed to fit. I love her.

Urban Fantasy Magazine: My understanding is that this is a dual-POV book? Will readers spend equal time in both points of view, or is one more of a support character?

KATHLEEN MARE’E: Yes, the readers will be inside both heads of these characters, which alternates each chapter. Whilst the chapters in Hendrix’s POV are definitely longer though, making her the main character of the story – you get the important story developments from Paxton’s POV too.

Urban Fantasy Magazine: What do you think distinguishes New Adult books from Adult ones? Why is it important for these books to have their own category?

KATHLEEN MARE’E: For me, I feel like New Adult bridges the gap between Young Adult and Adult. There are those years between highschool and say, being a fully-functioning adult (where you might be paying bills, working full-time and more secure in yourself) where so much of your character development happens which leads you to who you become in adulthood. You are still learning to be a grown up, and your emotions are still running high, but the stakes feel so much higher because you are supposed to know what the hell you’re doing. That’s why I love this genre personally, because you can explore so much emotional and physical development with your characters.

Urban Fantasy Magazine: There’s so many different types of romance novels–from contemporary to historical to paranormal. What is one book you’ve enjoyed (or look forward to reading) in each of these three subgenres?

KATHLEEN MARE’E: Wow this is a tough question! I love reading and read far too much considering I have my own novels to write! For contemporary, I’ve loved the Fallen Crest, and Paper Princess series (which are always re-reads for me). I’m not really into historical romances to be honest, or maybe I just haven’t found one worth sinking my teeth into yet (PM me if you have any suggestions or follow me on goodreads to send me some rec’s)! And paranormal (one of my FAVE subgenres) I love the Lux series (which is probably more YA), and the From Blood and Ash series! Basically, anything by Jennifer L Armentrout! Adore them!

KATHLEEN MARE’E: Nope! It was definitely a creation I had imagined which was probably a combination of other movie and book colleges I had watched or read about, as well as real-life colleges I had visited in the states over the years (and there have been MANY). 🙂 It’s definitely its own fictional world.

Urban Fantasy Magazine: Okay, last question. If you could magically step into Paxton and Hendrix’s world, what’s the first thing you would do?

KATHLEEN MARE’E: As boring as it sounds, I would probably just want to hang out with them! The dynamics of the elites and Hendrix’s little crew, is full of banter and fun (which I love), so it would definitely be an entertaining afternoon just to hang with them at the Academy. Or maybe I’d watch Pax, Austin and Banks play a game of football!

Urban Fantasy Magazine: Sounds like a good time to me! Thanks for joining us for this interview.

KATHLEEN MARE’E: Thanks for having me! And for something extra: If anyone who reads this interview on your blog would like me to gift them a free book of mine to read – please ask them to email me.

Urban Fantasy Magazine: Will do! Anyone who’s interested can enter the ongoing Rafflecopter or visit Ms. Mare’e’s website directly to get signed copies of her novels, more information about upcoming stories, or just to follow her blog. Thanks for reading!

2 thoughts on “Creating Broken Wing: an Interview with Kathleen Mare’e”