Editor’s Note: It’s hard to believe, but October 1st (the official start of planning your NaNo novel) is a mere six weeks away. We’ve got some fun stuff in store for the months ahead, but if you’re unfamiliar with the event, read on for an intro by our guest blogger, Annalisa Carr.

NaNoWriMo is National Novel Writing Month, although it should really be International Novel Writing Month, as participants come from all over the world. It takes place in November each year and is an internet-based creative writing project. The challenge, for the participants, is to write more than fifty thousand words between 1st and 30th November. When it first started in 1999, it had fewer than 100 writers involved, now it has hundreds of thousands, and about 400 of the completed novels have been published traditionally, with more self-published.

I’ve been taking part since 2012, and wrote the first drafts of three of my published novels during various Novembers. I have nine first drafts, which I wrote during the Novembers. It’s a brilliant way of trying out new ideas, new genres, and getting a rough first draft down on paper in a short time. I think of this first draft as an elaborate and detailed plot.

NaNoWriMo maintains a website, with motivational articles by well-known authors, a forum for young writers, many chatrooms, and a summer writing camp. It’s an awesome way to set goals and to meet and learn from other writers.

Last year, I wrote an urban fantasy, the year before, a space opera, and the year before that, a dystopian science fiction novel. These are presently incubating at the back of my mind, waiting for a time slot to become available. Then I’ll rewrite. 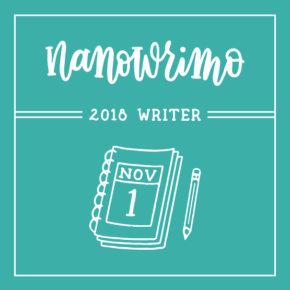 Although, NaNoWriMo is an internet-based challenge, it does have local chapters, which occasionally meet up in real world cafes, bars and libraries. I belong to the Lancashire and Cumbria chapter, a sub-branch of Europe: England. This branch covers a wide area, but I try to go to at least a couple of face-to-face meetings during November. I’ve met some interesting and inspiring fellow writers this way, as well as a range of non-writers who’ve been fascinated by what we are doing.

Does anyone else out there take part in NaNoWriMo? Maybe we could be NaNo writing buddies?

Annalisa Carr lives in the English Lake District, where she shares a view of
the fells with three cats. She spent the early part of her life
working as a protein crystallographer, a job she found fascinating.
She now spends her time writing, in a variety of genres. Science
Fiction, fantasy and fantasy romance are her favourites.

Editor’s note: Thanks for sharing, Annalisa Carr! Hope to see lots of new writers on the NaNo boards this November!