Grace Blair is a successful award-winning author, modern mystic, wellness consultant, business development advisor, marketing coach, and workshop facilitator. She has faced many life challenges, including a life-threatening disease, and used what she encountered as a stimulus to gain greater happiness and fulfillment. Her young adult novel, Einstein’s Compass, was released at the start of 2019.

What if young Albert Einstein had a magical compass that inspired his theories of relativity?

In Einstein’s Compass: A YA Time Traveler Adventure, a young Albert is given a supernatural compass that allows him to travel through time and space, and find wisdom in other dimensions, including the lost city of Atlantis. But evil forces seek the power of the compass, including a monstrous, shape-shifting dragon from a different age. Can the compass protect Albert from such villainy?

Urban Fantasy Magazine: What made you decide to do a book about Einstein?

GRACE BLAIR: I have always thought of Einstein as a fascinating person. He lived during the horse and buggy days where the light bulb was the most advanced technology. So how did he come up with his miracle theory given the circumstances of his life? So I asked myself the what if question. My book of fiction follows his biographical history from age six to twenty-six and adds a new level of mystical spirituality that he had help from a supernatural compass and mystical beings who assisted him in his heroes’ journey and his miracle theory. Einstein believed that we have to go beyond what we can see and measure in the physical world. My book, Einstein’s Compass, goes beyond what we know and adds a possible fictional explanation for how he came up with his miracle theory and changed the world.

Urban Fantasy Magazine: What kind of research did you have to do for this book?

GRACE BLAIR: I read Einstein by Walter Isaacson and took twenty years of Albert Einstein’s real world from when his father gave him a compass at age 6 until he received his miracle theory at twenty-six. The story of Atlantis came from Doug Simpson who writes stories based on the spiritual channel Edgar Cayce, The Sleeping Prophet. I contacted Doug and asked him which books that Mr. Cayce wrote that had the details of Atlantis. Doug replied, his book, We Lived in Atlantis. In addition, I incorporated Initiation by the Nile by Mona Rolfe. The Shamir Stone is a mystical being that assisted King Solomon build his temple. Details of the Shamir Stone were found in the book, Sacred Monsters by Natan Slifkin. The chapters on Egypt and Jerusalem came from Wikipedia. The chapter with Galileo came from my trip to Pisa, Italy where I sat in the church next to the leaning tower. The church in Pisa is where Galileo discovered his theory of time. Mary Magdalene came to me intuitively while I was writing the chapter on The Treasure Hunt. She wanted to be in the chapter so I did research and found her relics were in the Monastery where the treasure hunt takes place in the story. The Mystical Travelers are partly from the Bible and my personal experience of them in my spiritual life.

Urban Fantasy Magazine: Sounds like you had a wide range of inspiration. What is your favorite story involving time travel?

Urban Fantasy Magazine: Do any other historical figures make an appearance in the book?

Urban Fantasy Magazine: Interesting. What was your plotting process like?

GRACE BLAIR: I followed Albert Einstein’s timeline and asked what if at particular events in his life.

Urban Fantasy Magazine: The what ifs always make for some great urban fantasy. Stepping out of the hypothetical, I’m curious–which of Einstein’s quotes is your favorite?

Urban Fantasy Magazine: That’s a great one. Now, which of your own quotes from this book is your favorite?

GRACE BLAIR:
Albert dangled a brass object on a silver chain, Johann’s eyes grew large. “Wow, what is that?”

“It’s a compass. My father gave it to me. Have you ever seen one before?”

Albert closed his eyes and held his precious gift to his chest. “Oh, I love my compass, and I love my Papa, who gave it to me.” The compass tingled against Albert’s chest. From inside the compass, a shimmer of light burst then radiated out about ten inches all around Albert’s hand. Albert felt the unexpected warmth and opened his eyes to find a rainbow projecting from the gems. Above the compass floated a three-dimensional number 33. Johann, struck with wonder, squealed, “Look at that!”

Urban Fantasy Magazine: I understand Einstein’s Compass centers on a classic good vs. evil battle. What about this sort of dynamic appeals to you?

GRACE BLAIR: Every day we make choices in our lives. Some of those choices can lead to consequences we never imagined. Which voice do we listen to when in relationships? Do we love and cooperate with people or do we decide to be jealous, vengeful, lie, steal, and cheat? Einstein’s Compass is not just about a direction finder, it is about the spiritual compass each person has within them. The darkness is in every one so is the light. Which will you choose? It part of the human condition and is in our DNA. Each choice has consequences.

Urban Fantasy Magazine: If you could travel to any period of time and live there, would you like to? When (and where) would it be?

GRACE BLAIR: The time period I would like to visit is Atlantis 25,000 BC. Before the destruction. As I write in Einstein’s Compass, Atlantis was an advanced technological society who harnessed energy to run our planet. The people were high spiritual beings who lived for hundreds of years without disease.

Urban Fantasy Magazine: That version of Atlantis indeed sounds like a wonderful place to live. But where (and when) would you go if you just wanted to just visit?

GRACE BLAIR: The first century during the time of Jesus Christ in the changing world of Israel and his family.

Urban Fantasy Magazine: Thanks for the interview. Readers can find more info on Grace Blair and her book below. There is a giveaway going on, for anyone who’s interested: 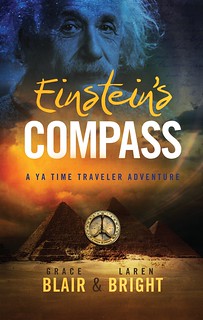 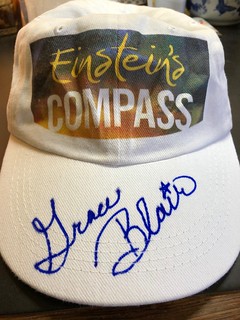 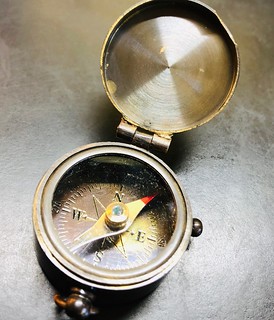