R.J. Blain is the author of the series Magic Romantic Comedies (With a Body Count). She suffers from a Moleskine journal obsession, a pen fixation, and a terrible tendency to pun without warning.

In her spare time, she daydreams about being a spy. Her contingency plan involves tying her best of enemies to spinning wheels and quoting James Bond villains until satisfied. 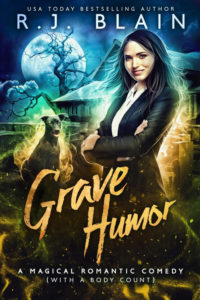 Editor’s Note/Mini Review: I started reading the first book of this series, Playing With Fire, to prep for this blog tour, and one of the first things that struck me was how the world feels both coherent and lived in. (As opposed to my pet peeve, which is characters who’ve lived in this world all their lives talking to their neighbors about world details they both already know.) The writing was smart and funny without trying too hard. The protagonist (though not the same as the one from Grave Humor), was both flawed and likable. The world is one where magic often comes off as more than a nuisance than a help, and the heroine wasn’t afraid to roll up her sleeves and deal with the tough stuff. If you’ve been feeling stressed in the midst of this crisis we’re all facing, these books are great to unwind with.

With all that said, enjoy the interview as we chat about the latest in this fun series.

Most days, Anwen regrets working at a funeral home despite the good pay. With the residents no longer inclined to stay in their coffins where they belong, she’s got her hands full making sure everyone follows the rules:

In the funeral home, there is no screaming, no murdering, no mutilation, no possessions, no kidnappings, no resurrections, and no cursing of any type. Be quiet and stay polite.

The day Old Man McGregor decides to take a walk and disturbs her peace, Anwen learns there’s a lot more to the basement in the funeral home than a vampire and a handsome gentleman on ice.

If she’s not careful, she’ll learn first-hand why ‘eternally yours’ is the most potent of threats.

Urban Fantasy Magazine: Thanks for joining us! Your series, “A Magical Romantic Comedy (with a body count)”–which is an awesome title, by the way–has thirteen books released so far. Are all the stories interconnected?

That said, there are characters who tend to show up. Archangels and the devil tend to be these characters. Any divine with a notable name, such as Anubis, may show up at his whim, too. The characters who do big events in the world tend to be mentioned later, too! It’s a mixed hat. That gives me a lot of room to wiggle.

Urban Fantasy Magazine: Is Anwen a new character to your series? How would you describe her?

R.J. BLAIN: Yes, Anwen is a new character, although the circumstances leading to her being a character happened in Whatever for Hire, book 5 of the series. There are also several reoccurring characters in this book. As for how I would describe her… she is capable of going with the flow and making the most of a bad situation. She’s perhaps too good at this, really.

Urban Fantasy Magazine: Of the books you’ve already released, which one was your favorite to work on?

R.J. BLAIN: Ack. This is a hard one. I think I’m going to have to switch to one of my pen names for this one, truth be told. When I’m not moonlighting as a speculative fiction author, I also write contemporary romantic comedy because it just makes my heart happy. The Run Around (Released on April 28, 2020) is a book I’ve been working on and off for a year and a half or so, and it just made me so happy writing it. It’s just a big bundle of happiness for me.

Except that one part that was horrible to write, but every book has at least one section like that. It wouldn’t be a ‘real’ book if it didn’t try to kill me at least once…

Urban Fantasy Magazine: Do you typically work on multiple books at once or only one at a time? (And if multiple, how do you stay organized?)

R.J. BLAIN: I usually have 3-10 projects going at the same time. I get bored, and sometimes, I just want to write for the pure joy of writing. So, Projects 3-10 are the ones I write for the pure joy of writing. I usually have two primary projects I’m working on to keep ahead of deadlines. I find it’s much easier to write 3,000 words on one project and then move to project two and write another 2,000 words than it is to write 5,000 words on just one project in a day.

I’ve written 10k+ in a day before just from jumping around projects and having fun for half an hour before moving onto the next fun thing. And sometimes, I just need the day off!

Urban Fantasy Magazine: You’ve had wonderful success as an indie author. Any advice for others just starting out?

R.J. BLAIN: Thank you so much! It’s been hard and it’s a lot of work. This is my day job, and I’m often putting in 12+ hours a day keeping to my rather crazy schedule. Truth be told, I took on way too much this year. Next year, I’m going to be much kinder to myself. I’ll still be working on a lot of projects, and I’ll still be releasing a lot of books, but I won’t be doing it on a deadline. I’m limiting myself to six pre-orders next year with everything else being done happening as it happens. I can only break this rule if the book is completely finished and I have my editorial notes in hand, and I think the book might have a chance to hit a list. That’s when I’ll pop an extra pre-order up and see if magic happens. Otherwise, 2021 is going to have a lot of blog posts beginning with “Surprise! It’s a new book!”

As for advice for others just starting out… I have a list.

Show vs Tell is hard to learn, but you give the reader a much better experience if you don’t use tell methods. Here’s an example:

Show, randomly written, quite possibly badly written: Bob emerged from the tent, stifling a yawn, his hair sticking up every which way. Behind him, a blonde-haired woman crawled after him, the flimsy strap of her tank top slipping off her shoulder. The brunette who followed in the blonde’s wake hadn’t bothered with the tank top at all, opting to wear a bra that had seen better days, one strap off her shoulder while the other barely maintained her modesty.

The final young woman to emerge smirked, and of the quartet, she was the only one to have figured out how clothing worked, dressing before escaping from the tent.

One reads kind of flat. The other gives you a pretty danged good idea of what Bob was doing last night, who he was with… and if they liked what they were doing together.

Showing is an experience.

Telling is what you do when you don’t what readers to experience the book.

Learn how to show. It’s hard, but it’ll bring your book to life.

And since I’m here, passive writing can serve a purpose, but you want to use it intentionally. Check your writing with the “by zombies” rule.

Example: I defenestrated the naughty cat.

This is active voice. I cannot add “by zombies” and have it make sense. There is a subject who is doing something to something else. (“I” is the subject of this sentence. Defenestrated is the verb. The naughty cat is the one who is defenestrated.)

Note: no actual cats were hurt in this example.

Example: I was driven to the theatre.

Active voice is an engaging voice, and when used with showing rather than telling, you get a far more engaging of a book.

But most importantly, keep writing with the intent of telling a better story every time. I think that will help most of all. (Never stop learning!)

Urban Fantasy Magazine: Excellent advice! So, what was it like getting the news that you’d hit USA Today’s Bestseller list?

R.J. BLAIN: Exhausting, each and every time. My favorite was when the Magical Romantic Comedy (with a body count) Starter Pack hit the list. My other two hits were done as a part of a group effort, but that instance was all me, one week, my book, and a lot of hard work and hustle. It was just magical.

I almost hit once with Whatever for Hire, but the book was removed from the list because of a late vendor, so some other titles bumped it off. That was a day of heart ache, let me tell you.

I really want to do it again, because it’s such a hard challenge. It’s tough! (And it’s expensive, because the way I hit when I’m all by myself is to get my book out in front of as many people as possible in as short of a time as possible.)

But it’s magical, seeing so much hard work and effort really, really pay off.

Urban Fantasy Magazine: I bet so! And finally, our last question: do you recommend mythological puppies as pets or not so much?

R.J. BLAIN: Ahahahaha! Definitely not recommended; mythological puppies come with a lot of baggage… and to say anything else would be a spoiler.

I hope everyone enjoys Grave Humor!

Urban Fantasy Magazine: Me too! Thanks for the interview. Readers can find more info on R.J. Blain and her book below. There is a giveaway going on, for anyone who’s interested. You can win a $50 Amazon gift card and a signed collection of 13 magical romantic comedy (with a body count) books!

One thought on “Creating Grave Humor: an interview with R.J. Blain”